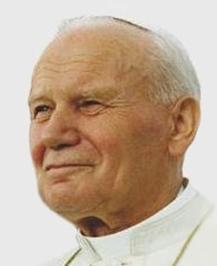 Pope John Paul was born in Poland on 18th May 1920, named Karol Józef Wojtyła. When he was young, he enjoyed playing football and was a good goalkeeper. He worked as a volunteer librarian and was an athlete, actor and playwrite. Military training was compulsory and he spent two months in the Academic legion. He would not hold or fire weapon.

He joined the priesthood and was ordained on 1st November 1946. At the age of 38, he became the youngest Bishop in Poland. He took part in the Second Vatican Council, helping to write two important documents about Religious freedom and the work of the church on the modern world. He became Archbishop in 1963 and Cardinal in 1967.

In October 1978, he became Pope John Paul II and would be the second longest serving Pope. As Pope, he beatified many people (gave them the title of Blessed) more than any other Pope. In 1984, he began World Youth Day, a gathering for young Catholics from all over the world, which takes place in a different country every year.

Many people claimed to have been specially blessed by Pope John Paul II and they felt he should be given the title “Blessed.” On 13 May 2005, Pope Benedict declared that John Paul could be names Blessed, despite five years since his death not having passed. On 30th September 2013, Pop Francis declared that he could be made a Saint.

In Year 3, they have celebrated the Feast Day of Blessed John Paul II by enjoying a party and recognising all of his amazing accomplishments and what wonderful work he does.

They celebrated with a Class-led Liturgy and then a party afterwards!