Throughout the school there are 4 Houses that the children belong to and the Patron Saint of each house inspires the children through prayer and example to work together in community to be the best they can be and the people God has created them to be. 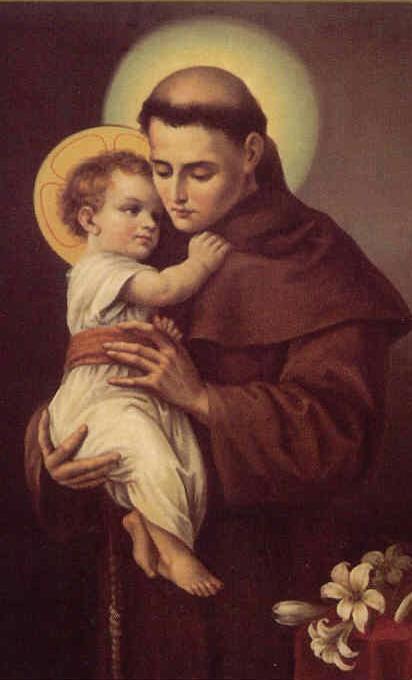 Anthony was born at Cona about the middle of the third century. His parents were very rich and wanted him to be a great nobleman. But he wanted to be poor and follow Jesus, so he became a Franciscan.

Anthony was a great preacher. He was send out as a missionary and preached in many cities in Italy and France. He brought sinners back to God mostly by his good example. One day, when Anthony was praying in his room, the Infant Jesus appeared to him, put His little arms around his neck, and kissed him. This wonderful favour was given to him because he loved Jesus very much.

When he became ill, he went to a monastery outside of Padua where he prepared for death. Many miracles took place after his death on June 13, 1231. Even today he is called the 'wonder-worker'. 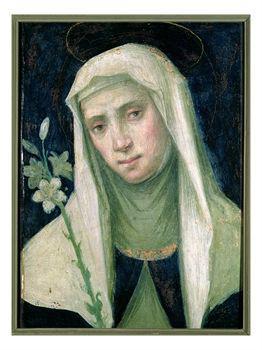 Catherine was the youngest of a very large family, she had twenty three brothers and sisters. At the age of six she had a vision in Church in which Jesus appeared to her and blessed her. She felt that Jesus wanted her to give her whole life to him. Catherine's parents wanted her to marry so she had her hair cut off and became a Sister instead, joined the Sisters of the Third Order of St Dominic. She took care of the poor and the sick, nursing people no-one else wanted to care for and spent a lot of time in prayer.

Catherine made a special visit to Pope Gregory XI and told him that God wanted him to live in Rome not France. The Pope listened to her because she was very wise and did go back to Rome.

In 1975 Catherine, who had never gone to school (she only learnt to read and write shortly before she died), was declared a Doctor of the Church. This is a title for someone who was outstanding in teaching and guiding the Church. St Catherine is the Patron Saint of Nurses. 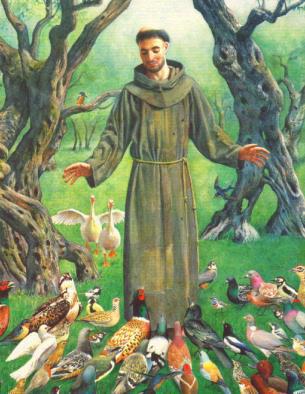 Francis was born in 1182. His parents gave their son all the good things that money could buy. He liked poems, songs and parties and became a knight for a while; he had a dream telling him to go home and to follow God. When he got home Francis went to pray in an old Church. There he heard Jesus telling him to rebuild it. He sold some of his father's best cloth and repaired the Church. He took off his fine clothes and gave them to the poor and left home.

Francis began to visit hospitals and to serve the sick. He believed that everything was made by God was very good. He admired the great and wonderful things of the world; he told all the birds and animals to praise God.

Some people decided to live like Francis and he took twelve young men to Rome with him, and the Pope gave him permission to start a new religious order, the Franciscans.

Francis had a vision in which he saw Jesus hanging on the cross and he was given the same wounds that Jesus had on his hands, his feet and his side. When Francis grew ill and weak he thanked God for the pain he was suffering. He died in 1226. 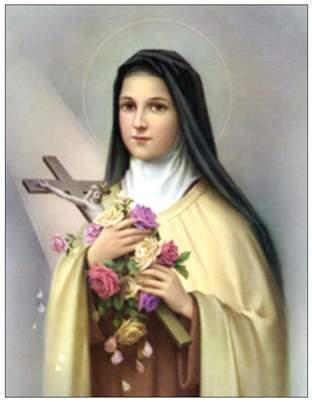 Therese was baptised two days after she was born. Her Mother taught her to pray but died when Therese was only four years old. In 1884 she made her First Holy Communion and was confirmed a month later. She wanted to become a Carmelite nun like her sisters but the Bishop said that she was too young so she went with her Father to Rome and asked the Pope. The Pope told her that she would go to Carmel if God wanted it.

Therese went to Carmel in 1888 and while she was there she prayed for missionary priests and wrote down her childhood memories.

She became very ill with tuberculosis, in spite of her many sufferings she always tried to be cheerful and help others.

Just before she died she told the sisters not to be unhappy after her death because she would send a shower of roses and spend her heaven doing good on earth. She died in 1897.