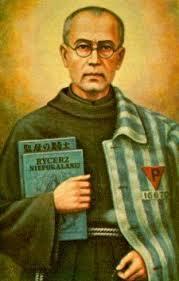 Maximilian Kolbe was born Raymund Kolbe on 8th January 1894 in Poland. His life was strongly influenced by a vision he had of the Virgin Mary when he was 12 years old.

As a priest, Kolbe worked for the conversion of sinners and enemies of the church. He travelled around Poland, promoting Mary and set up a religious printing press. Later, he founded monasteries in Japan and India.

Kolbe returned to Poland in 1936 due to his poor health. When World War Two broke out, he was one of the only Franciscans to stay in the monastery and he opened up a hospital for those who had been injured. He also provided shelter for refugees. Kolbe refused t sign paperwork that he would be recognised as a German citizen and when the monastery was shut down he was arrested.

After 2 months in the concentration camp at Auschwitz, some me were chosen to be starved to death. Kolbe was not one of them, but he took the place of a man with a family. After 2 weeks, he was the last person still alive and he was given a lethal injection. It is said that he calmly raised his arm and awaited death.