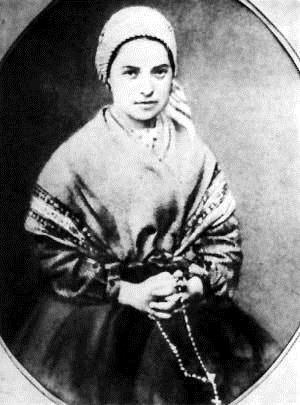 Bernadette was born in 1844 in Lourdes, in France. Her family was very poor. As a child, Bernadette suffered with asthma and was often unwell. She missed a lot of school.

On 11th February 1858, Bernadette went out to gather firewood with her sisters. Due to her illness, Bernadette was not allowed to walk across the river, so she stayed the other side. While she was waiting, she saw a vision of a lady in the cave. Bernadette saw the lady eighteen times. The lady asked her to dig a little hole in the ground and to wash her face. Suddenly a spring started to flow. The lady was Mary, Our Blessed Lady.

The spring became popular amongst lots of people when they heard it was the place where Our Lady had appeared and many people came to visit. To this day, the spring is a place of pilgrimage, especially for the sick who visit Lourdes for healing. Bathing in the spring has cured many pilgrims.

Later Bernadette became a nun. She died at the age of thirty six in 1879.